The reason why James does not say, “If any of you lack wisdom, read your bible,” is because the bible does not reveal all there is to know about God and about how to do life. Simply put, the bible does not have all the answers. This does not mean that it is inadequate or insufficient. It just means that there is more to know than what the bible provides. Besides, the bible was not meant to have a cookie-cutter answer for every possible circumstance – that was not God’s aim in giving us his inspired word.

Proof: how many of you will turn to “Thus Saith Google” in the next 7 days, attempting to put real facts and figures together so that you can make a wise decision? Why not condemn research altogether and just read your bible? And why not just google what we need to know instead of asking God?

At this moment, I’m having a very, very smart man do something for me – and he’s worth every penny I’m going to pay him. He does not know the Lord, and could not tell you where Genesis is in the bible. And the knowledge that he has in a particular area – there is not a whisper of it in the bible. But . . . it is wisdom that says to me, “Ivan, you’re as dumb as a hammer in this area. You should seek out a reputable source of knowledge so that this pressing issue does not blow up in your face.”

Let’s put this all together:

2. If you are not asking God for wisdom in how to persevere through a pressing issue, you are robbing yourself of one of the means of successful Christian living. It’s actually arrogance and pride in the heart that believes you can navigate your trials without asking God for on-the-spot wisdom. What hubris does it take to go throughout your life, saying to yourself, “I’ll go to this place, for this purpose, for this amount of time, to accomplish this outcome” (James 4:13-17) – without any feeling of inadequacy of knowledge, and without any acknowledgement that the Lord is sovereign over one’s life? As one reader commented to me on this subject,

“The trials of life that James mentions in 1:2 are a means that God uses to show us our inadequacy in dealing with our earthly struggles – thus driving us to prayer and asking God for His Wisdom to live appropriately and persevere in any circumstance.”

3. Read James again from this angle: His entire letter is the application of Scripture. It is not enough for James to quote a few verses here and there, he actually practices what he preaches. He’s providing godly wisdom on how to negotiate the application of faith that really works itself out in every day circumstances. So much so, that he challenges the false assumption that if you say you have the faith that saves, but not the every day practical and wise works of perseverance that follow faith, then you are deceived: you don’t have the faith that actually saves you from sin.

This is a good place to conclude:

I need daily-living wisdom from God so that as I read his Word, hear sound advice from those within the faith (Prov. 15:22) and those without (Matt. 5:45), I can make some sense out of the presses and stresses that are refining my faith (James 1:2-4). My God is much bigger than the Word that he gave me. This does not diminish the authority of his Word, but points me to the Author of what is written.

As quoted from James 1:5, consider the context and the aim of his letter and with as few words as possible, answer the title question as best as you can. I’ll put all the various answers on the next post and then provide commentary. This is a very important subject that I’m sure will raise some healthy and encouraging discussion. You may email me with your answer at gccyorkville@sbcglobal.net if you prefer. 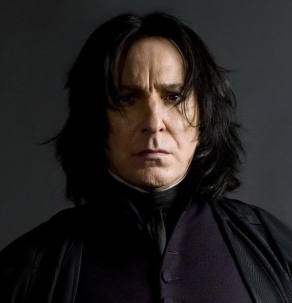 Truth is, some people are never satisfied – with anyone or anything. They either have too high an expectation, or an unrealistic expectation, or mostly, a deep inner need to feel perfect about themselves by finding fault with you – no matter what! The only time that they are ever happy is when you’re not. And that is what validates their superiority over you. It is their attempt to control and manipulate through emotional abuse.

This is how the Pharisees lived and this is how Jesus put it:

“To what then shall I compare the people of this generation, and what are they like? They are like children sitting in the marketplace and calling to one another,

John the Baptist was under a Nazarite vow and lived an ascetic life, depriving himself of normal pleasures. He did not manicure himself and he lived in a desert, ate like a wild animal robbing honey from bee hives, ate locusts (crunch crunch), and did not drink wine. The Pharisees looked at all this self-depriving and pursuit of solitary time with the Lord as demonic – they said that John the Baptist was demon possessed and therefore rejected his message “repent for the Messiah is coming.”

Jesus on the other hand, came on the scene like a normal Joe. He dressed and took care of himself like most people do, he ate regular food and drank wine. He did nothing out of the ordinary as he healed and proclaimed that the Kingdom of God had arrived in him. But the Pharisees again started the name-calling, and tagged Jesus as a glutton, an over-eater of food, and a drunkard, an over-drinker of wine. True, if Jesus had eaten too much food he would be a glutton, and if he drank too much wine he would be a drunkard. But neither accusation was true, but only fabrications to reject him.

No matter what, no kind of living from those sent by God satisfied the Pharisees, except their own. Truths said in love never pleased the religious elites and cultural gatekeepers of society. The Pharisees were the self-appointed gurus who perched themselves over society, with smugness telling everyone else how to live, calling people names, and threatening others with punishment if they speak out against their established, hypocritical dictatorship. And therefore,

As a Christian, no matter what truthful thing you say with the most loving and respectful attitude and tone, you still will be called a homophobe, a bigot, a man-hater, a freak of nature, a worthless piece of human excrement. You will be threatened, ostracized, fined, fired, demoted, flunked, and kicked out. But with God’s grace and power of the Holy Spirit to guide your path, stay the course, do not retaliate, do good to those who mistreat and persecute you, and you will see that in the end, that “wisdom is justified by your children.” Meaning, the offspring and produce of living a wise life in Christ will prove in the end to have been the right path. And those who nit-picked you apart for every single fraction and discounted your very life as worthless, will in the end face Jesus himself – and then he will have the last word.

As for me, I will keep hanging around the untouchables of society like Jesus did, to tell them of a joyful life in Christ with sins forgiven. While others reject, some will accept. Some people will always be disappointed with you, like they were with Jesus. But others will hear the gospel as the good news that it really is. They will love Jesus with all their heart, just as the discredited woman did as she wept with joy at Jesus’ feet, while Simon the Pharisee continued on his path of self-destruction (Luke 7:36-50).

Proverbs 5:18ff commends enjoyment with the girl you married when you were young. Yesterday, I enjoyed spending the day with her. I’m not in the dark about how this was made possible – much grace in many ways made the day. Contributors to our life together: loving family, skilled doctors and nurses, good eating and exercise habits, world-class hospitals, and an exceptional godly church family, all put together make one’s life a display of grace. For it is pure undiluted grace that explains the richness of life.

. . . she’s thrifty, enjoying some German cuisine at Prost with a $15 coupon that she found on the internet. I had pork belly and she had veal. 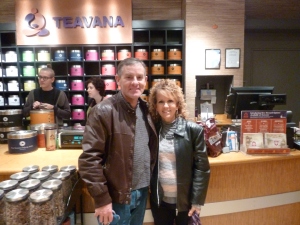 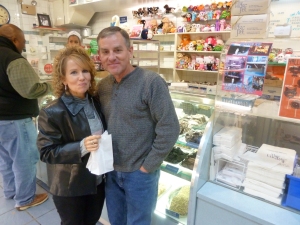 . . . she’s frisky, as long as she gets her chocolates at The Fudge Pot!

. . . she’s shifty, because no matter how hard I try to steer clear of things that grow in gardens, she suckers me in to stopping at these spots.

. . . and she’s pithy. (that’s a synonym for “short” as clearly seen above standing beside a security guard). Visiting Hershey’s in Chicago is always a must. BTY, I just love how cinnanyms give us other options so we don’t use the same word twice – especially on sweet rolls – don’t you!?

Happy Birthday Cheryl. It was a great day in Chicago with you.