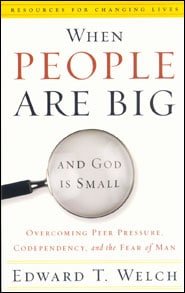 It was 1997 when Ed Welch published his book, of which the post is titled after. Of all the books that Ed has written, this is by far one of my favorites.

Below is an outline that we’ll use this Wednesday, Jan. 9, 2019, to begin this bible study for our church family. If you’ve never read anything by him, this would be a first great read. Follow this link for a bio of him:

“The opposite of love for others is an inordinate love for self; ‘love for self’ is simply fear of man. The reason why we are incapable of loving others as we ought is because we fear them, that is, we have an unhealthy reverence for them more than God.

Are you always second-guessing decisions because of what other people might think? Are you afraid of making mistakes that will make you look bad in other people’s eyes?

Fear of man is such a part of our [fallen] human fabric that we should check for a pulse if someone denies it . . . God can fill you with his love, so you don’t have to be filled by other people.”

I’m looking forward to this study because I want to love God more and fear man less. Ed will pastorally walk you through scripture, showing you how to do this.

Almost always mildly satisfied with my prayer life, I often turn to someone for encouragement. Tim Keller wrote his book, “Prayer: Experiencing Awe and Intimacy with God” (published in 2014), and this is my first book to read this year because I want to do better at praying and having a devotion with Cheryl. For our devotions this year, we’ll use the Keller’s, “God’s Wisdom for Navigating Life: A Year of Daily Devotions in the Book of Proverbs.”

Do not admire me for what appears to be a strong spiritual walk with God. Hardly! I struggle with the same ups-and-downs as any believer does with prayer and devotion with a spouse. But if this post encourages you to do better, then mission accomplished.

Might I give you a quote to help you as it did me; Tim begins his book on prayer like this:

“In the second half of my adult life, I discovered prayer. I had to. In the fall of 1999, I taught a Bible study course on the Psalms. It became clear to me that I was barely scratching the surface of what the Bible commanded and promised regarding prayer. Then came the dark weeks in New York after 9/11, when our whole city sank into a kind of corporate clinical depression, even as it rallied. For my family the shadow was intensified as my wife, Kathy, struggled with the effects of Crohn’s disease. Finally, I was diagnosed with thyroid cancer. At one point during all this, my wife urged me to do something with her we had never been able to muster the self-discipline to do regularly. She asked me to pray with her every night. Every night. She used an illustration that crystallized her feelings very well. As we remember it, she said something like this:

Imagine you were diagnosed with such a lethal condition that the doctor told you that you would die within hours unless you took a particular medicine – a pill every night before going to sleep. Imagine that you were told that you could never miss it or you would die. Would you forget? Would you not get around to it some nights? No – it would be so crucial that you wouldn’t forget, you would never miss. Well, if we don’t pray together to God, we’re not going to make it because of all we are facing. I’m certainly not. We have to pray, we can’t let it just slip our minds.”

“Maybe it was the power of the illustration, maybe it was just the right moment, maybe it was the Spirit of God. Or, most likely of all, it was the Spirit of God using the moment and the clarity of the metaphor. For both of us the penny dropped; we realized the seriousness of the issue, and we admitted that anything that was truly a nonnegotiable necessity was something we could do. That was more than twelve years ago, and Kathy and I can’t remember missing a single evening of praying together, at least by phone, even when we’ve been apart in different hemispheres. Kathy’s jolting challenge, along with my own growing conviction that I just didn’t get prayer, led me into a search. I wanted a far better personal life. I began to read widely and experiment in prayer. As I looked around, I quickly came to see that I was not alone” (pgs. 9-10).

And neither are you. May the Lord be your joyful pursuit this New Year!