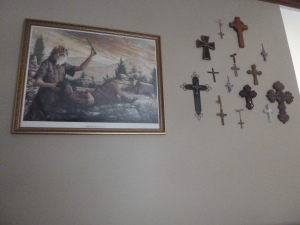 Artwork on one of our walls in our home expresses that the ram caught in the thicket is a picture of Jesus. Like the ram, that will take Isaac’s place upon the altar, Jesus will offer himself as our substitute and be sacrificed in our place (Gen. 22). The ram will die. Isaac will live. The Lord has provided, but not just for Isaac, but as John described,

“And when he had taken the scroll, the four living creatures and the twenty-four elders fell down before the Lamb, each holding a harp, and golden bowls full of incense, which are the prayers of the saints. And they sang a new song, saying, “Worthy are you to take the scroll and to open its seals, for you were slain, and by your blood you ransomed people for God from every tribe and language and people and nation, and you have made them a kingdom and priests to our God, and they shall reign on the earth.”

Jesus died not just for Jews, his own kinsmen, but for people from every ethnicity upon the earth – hence, the various crosses that have historical roots in world history with regard to their artistry. Not that Jesus died over and over, but that his one-time-death in real space and matter is the most significant event that the world must reckon with.