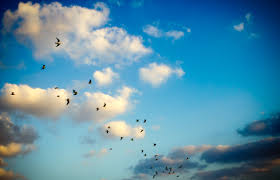 “Look at the birds of the air: they neither sow nor reap nor gather into barns, and yet your heavenly Father feeds them. Are you not of more value than they . . . Are not two sparrows sold for a penny? And not one of them will fall to the ground apart from your Father” – Matthew 6:26, 10:29.

Jesus said to look at birds through the lens of his Father’s Sovereignty. Jesus said that birds are taken care of by his Father and he also said that they fall and die only if it’s his Father’s will. The trusting Son that was destined to die on the cross said this to highlight the massive difference between God’s care of birds and you, so that when you are tempted with doubt and unbelief that God is good, you may take heart. The exhortation is simple: Look at a bird today. I mean, take the time to observe and think about the insignificance of bird-life, not to demean one of God’s creations, but there are a kazillion of them fluttering around us all the time and most will be born, eat, and die without much hoopla. Birds happen – But not those who love Jesus. What?

I mean this: Birds are cared for, each and every single one of them. But compared to lovers of Christ, it looks like negligence. Jesus is drawing a contrast, not to dismiss the value of birds but to exalt the value of sinners saved by grace. Your soul is incalculable in its worth because you were made in the image of God – birds were not. But birds don’t die willy-nilly even though they’re only worth a few pennies. How much more then is your life and death taken into consideration by our Father in heaven?

The appointed suffering that will lead to your appointed death has infinite worth. Why? Because when you say in your heart by faith, “I’d rather have Jesus, than anything this world affords today,” you are saying that whether in life or in death, my Father’s will for my life is perfectly executed by the same wisdom, care, love, and power that designed a species that can float on air with the greatest of ease. If God cares that much for a nearly insignificant creature worth only a few cents, how much more does he care about you today.