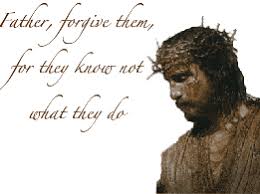 My aim for writing on this subject has been to magnify the healing processes of the Lord for the wounded heart whose tormentor will not confess his sin. In this fourth part I want to cover the passages of Scripture that I believe have to do with the desire for forgiveness. But let me first say that I make a distinction between actually forgiving someone and desiring their forgiveness, therefore, I believe that we are to desire forgiveness for the unrepentant without forgiving them of their sin. This is a distinction that Scripture seems to support. In other words, there is a difference in saying, “I forgive You”, and “I desire that you receive forgiveness from the Lord.”  When an abuser is unrepentant we are to desire, pray, and long for his heart to be healed by the forgiveness that only the Lord can provide. This is part of the healing process for the wounded heart. After giving God the place of vengeance, freeing the heart up to do good to the enemy, one is also ready to desire forgiveness, or as some put it, have “a spirit of forgiveness” toward your enemy.

Let’s bring Stephen, Paul, and Jesus to bear witness that we are to desire and express from the heart that our unrepentant abuser be forgiven.

Luke records for us in Acts 7 the incident where Stephen became the first martyr for the New Testament church. After preaching one of the best sermons recorded in Scripture, verse 57 says, “Then they cried out with a loud voice, stopped their ears, and ran at him with one accord; and they cast him out of the city and stoned him.  And the witnesses laid down their clothes at the feet of a young man named Saul.  And they stoned Stephen as he was calling on God and saying, ‘Lord Jesus receive my spirit.’ Then he knelt down and cried out with a loud voice, ‘Lord, do not charge them with this sin.’ And when he had said this, he fell asleep [that is, he died in the Lord].”

This is a stunning testimony of compassion for one’s enemies. One can hardly imagine the kind of heart it must take to desire the very best for a group of people who have done their very worst to you. Is this not love?

What does it mean to ask the Lord to not charge an enemy with their sin? Stephens’ unrepentant tormentors hear a prayer offered up to God, desiring that He would not treat them according to their sin. Stephen is a man full of the Holy Spirit and the Word.  In order to have a heart like this one must be very alert to his own forgiveness of sin in which he stands. Stephen knows that his own heart has been circumcised of his sin and that the Son of Man is his advocate (vss. 51-56). Stephen does not say, “Lord, I do not charge their sin against them” – which would be real and actual forgiveness; rather, he prays that the Lord will not charge them with their sin. They are not forgiven of their sin which is why Stephen prays for their release from the penalty of their sin. This is a prayer that God would forgive them.  We ought to pray that God would forgive those who hurt us. This is not the same as saying, “I forgive You.” What are we actually praying for then, when we ask God to not charge our abuser with his sin? Are we asking God to just forgive them while they are yet stiff-necked and stubborn in their hearts? Are we asking God to forgive them of their sin even though they do not want forgiveness? Of course not. When we ask the Lord to not charge our enemy with his sin, we are asking God to grant repentance so that they might be forgiven (2 Timothy 2:25). God does not forgive sins – for nothing! He forgives sins for repentance to Him and faith in Jesus Christ (Luke 3:3, 5:32, 24:7; Acts 5:31, 20:21). If God does not charge a sinners’ account with his sin it is not because God excused or exempted the sinner, as if he was secretly “let off the hook” for his transgression while his heart is still justifying his sin. But rather, God does not charge a sinner with His sin when the sinner repents. Therefore, we are asking God to so work in our enemies’ heart that he sees his need of forgiveness and calls out to the Lord to have mercy on his soul.

The Apostle Paul prays this way for his fellow workers who forsook him when he needed them most (2 Timothy 4:16). Paul was giving a defense for the gospel in a Roman court of law but this was too much heat for some of Paul’s friends – so they ran. Demas wanted nothing to do with standing for Christ in the public arena with Paul (vs. 9). He loved the safety and temporal comforts of the world and abandoned Paul. Clearly this was sin on Demas’ part and the others as well who left Paul. Yet Paul prays, “May it not be charged against them.” This is not a statement that the Lord has forgiven or that Paul has forgiven them; it is a prayer asking the Lord to forgive. The prayer for forgiveness implies that they are not forgiven! Since God never forgives apart from repentance, Paul is asking the Lord to “grant them repentance, so that they may know the truth, and that they may come to their senses and escape the snare of the devil, having been taken captive by him to do his will” (2 Timothy 2:25-26), we are asking God to rescue their heart from Satan’s grip of defiance toward God.

Our last person to bear witness that “to forgive” and “desiring forgiveness” are distinct Christian virtues is Jesus Christ.  Probably more people have referred to Jesus’ saying on the cross than any other statement in Scripture to support the position that as believers we must forgive the unrepentant trespasser because that is what Jesus did. But as we will see, Jesus did not forgive those who crucified Him.  Luke records in his gospel account, “Then Jesus said, ‘Father, forgive them, for they do not know what they do’” (Luke 23:34). First, notice that Jesus did not say, “Your sins are forgiven.” If that is what Jesus wanted I see no reason why Jesus could not have forgiven them since He can forgive men’s sins (Luke 7:48). But unlike the woman in Luke 7 with less-than-admirable character, whom Jesus did say, “Your sins are forgiven,” Jesus asks His Father to forgive them – while Jesus does not!  Why didn’t Jesus pronounce forgiveness for His tormentors like He did for the woman kissing His feet? It is because the woman “loved much” (7:47) while His torturers loved to torment. Jesus can’t forgive those who crucified Him because they do not love Jesus with repentance and brokenness of sin like the woman did. Jesus is truly a God-centered man on the cross setting the example for Stephen, Paul, and us to beseech our Heavenly Father’s work of grace in the sinner’s heart, bringing about repentance that leads to forgiveness.

Did Jesus’ Father answer the prayer? Oh Yes! The Centurion is forgiven because he sees that Jesus was a righteous man (Luke 23:47), and later, as Luke records, Peter said to the very ones that Jesus prayed for, “. . . you have taken by lawless hands, have crucified, and put to death. . . Now when they heard this, they were cut to the heart, and said to Peter and the rest of the apostles, ‘Men and brethren, what shall we do?’ Then Peter said to them, ‘Repent, and let every one of you be baptized in the name of Jesus Christ for the forgiveness of sins; and you shall receive the gift of the Holy Spirit’” (Acts 2:23, 37-38). Jesus prayed from the cross that His Father would forgive his assailants and God the Father answered His Son’s prayer by effectively cutting their hearts that leads to repentance which leads to forgiveness of sins.

When a child of God has been sinned against, and her transgressor will not repent, she is not to forgive but to give God the place of vengeance. Now she is to pursue her enemy with loving good works all the while asking God to forgive him by working in his heart in such a way that he will turn to God in repentance and receive forgiveness of sins. She is free to trust God either to avenge in His time and in His way, or to grant repentance which leads to forgiveness. And if her abuser repents, she is to forgive him just as her Father in heaven forgave her when she repented.

I’ll make one more final post on this subject next week.